This caregory deals with chatoyant gemstones such as Tiger's Eye, Hawk's Eye, Pitersite, Silkstone, Binghamite, Tiger Iron. Tiger's Eye is a durable quartz composite with the usual quartz hardness of 7. It begins as the fibrous blue mineral called crocidolite, which is comprised of iron & sodium. Most of us known crocidolite as asbestos. The transformation begins when quartz becomes imbedded between the fibers of crocidolite. This process will result in one of two gemstones. A blue stone called Hawk's Eye or the golden brown stone called Tiger's Eye. Pietersite is a chatoyant, solidified crocidolite asbestos, but its appearance is quite different because it's been broken into fragments (brecciated, in mineralogical terms) 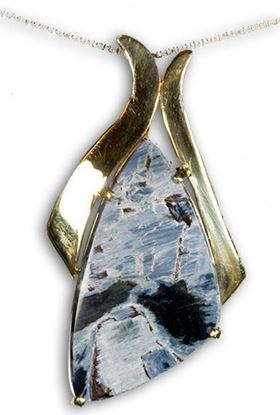